My interests are very wide and varied and are as diverse as Steam Railways and Popular Music from the 1960's onwards. My interest in railways stems from my childhood days in the early 60's spent on West Hallam Station and, as anyone around at the time will

understand, The Beatles greatly influenced my musical tastes. After leaving Ilkeston Grammar School in the late 60's and studying both Chemistry and Accountancy ( at different times ) I eventually left Derbyshire and moved to Tyneside in 1975. I joined Buck and Hickman in 1976.

I became a supporter of Derby County in the 60's and still follow them today ( from my armchair ) followed by Newcastle United after my 15 years on Tyneside.

I moved to Aberdeen in 1990 and have settled well and made many good friends. My interests also include PCs, The Internet, Shooting, Sport and others too numerous to mention. I am retired now and regular walks with my dog Basil are also part of my routine.

A selection of my guns 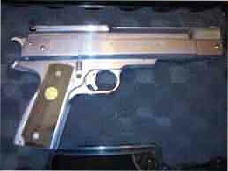 Lanber Sporter 12 Bore Under and Over